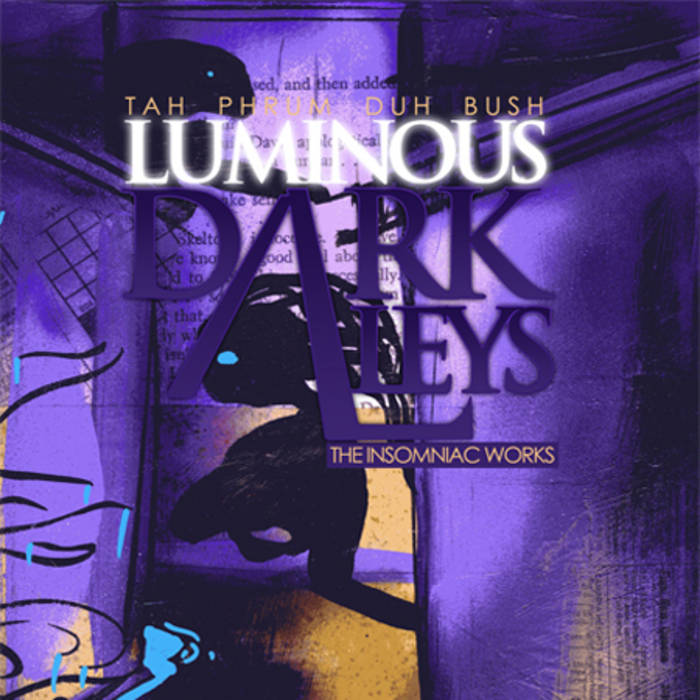 Everyone has become accustomed to artists boasting about how they never sleep, but for Tah Phrum Duh Bush his sleeplessness has never been a point of pride, it’s been a serious condition. For the majority of the Brooklyn, NY, native’s life insomnia has taken his nights away from him. Instead of turning to modern medicine to attempt to cure his sleeplessness, however, Tah worked to turn his pain into art, and created Luminous Dark Alleys: The Insomniac Works.

Luminous Dark Alleys: The Insomniac Works is a 15 track album (14 original songs and one remix) based on his experiences with insomnia and the ideas that have run through his head as a result of not being able to sleep. Tah describes the album as “a dark ride through the mind of an insomniac.” It’s a ride that comes with an accompanying 100+ page book that has a chapter for each song and gives listeners a deeper, fuller experience, that Tah says is “super personal.”

The project is the long awaited follow up to Tah’s 2005 release Sunshine or Pure Shade. During the five years in-between albums Tah experienced a number of extreme highs and lows. There was the triumph of touring Europe a number of times, including a three month stay there in 2009, but also the tragedy of losing his home to a fire. Thankfully, one very important item in his home was saved by a firefighter with a keen eye who noticed one of Tah’s backup hard drives on the floor and managed to kick it under a table before they finished spraying the place down, saving some of Tah’s work. The rest of his drives were lost in the fire.

For most artists, not having a new album out, and touring overseas, results in anonymity at home, but Tah kept his name alive and well through his unique guerilla marketing techniques. His giant “Tah Phrum Duh Bush” sign that he takes to shows, and the “missions” he sets up for his fans that have them promoting his name throughout the city in large groups, have become nothing short of legendary in NYC’s underground hip-hop community.

One of the reasons Tah has so much support in that community is because of all the support he continues to give. Having been involved in the scene since the days when he could be found rhyming alongside Mos Def and Black Moon in park cyphers, Tah is a regular at shows, and is more than willing to answer his phone at any hour of the day or night to give advice to those who seek it.

Tah also packs the house for his performances. Not content with having a typical hip-hop show, Tah enlivens the crowd, getting them involved in more than just the traditional call-and-response way. When he performs “Micro-PH-One-01,” a song off of Sunshine or Pure Shade in which he explains the proper way to use a microphone, he has a volunteer holding cue cards for people to read and gives everyone a diploma at the end of the song for graduating from the course.

There’s a graduation of another kind Tah is also concerned with, and it involves the kids in his community. This is why in 2005, with schoolteacher Rosaleen Knoepfel and fellow emcee Bisco Smith, he helped launch Urban Art Beat, an after-school program where local emcees, in a safe environment, mentor inner city kids in the art of crafting rhymes. After seeing initial success in the South Bronx, Urban Art Beat has expanded to other areas ofNew York and sees numerous emcees volunteering their time each semester.

Sleeplessness keeps Tah working when even the artists who claim to be up all night have gone to bed. As he continues to put those long nights to good use for both himself and his community, the latest result of his sleeplessness, Luminous Dark Alleys: The Insomniac Works, will wake up anyone who isn’t already familiar with Tah Phrum Duh Bush.

“The Plague of a Million Thoughts per Hour” is the thinking being’s disease. For as long as he can remember, Tah Phrum Duh Bush has lived the life of a person afflicted with such a condition. With this condition comes a multitude of afflictions and symptoms. The chief of which, in Tah’s case, is Insomnia. It wasn’t until recently that he even knew he had insomnia. Millions of people all over the world are affected by things that cause insomnia. It appears that Insomnia is more common than the “Common Cold”. The curious thing about insomnia is; most people that are affected don’t realize that they experience it in one form or another. If you’ve ever found yourself staring at the ceiling in the middle of the night or struggling to fall asleep or stay asleep, you may have had a taste of insomnia. If it happens to you every night, you definitely have insomnia. When you can’t sleep, what goes through your mind? What bizarre flights of fancy are brewing? Tah can tell you. Tah would be a charter member of the “Insomnia Club” if there were such a club. Sleeplessness has opened new pathways of thought and understanding for Tah. After fighting it for so long, Tah has actually embraced his ailment and seeks to join minds with other insomniacs through the sharing of his experiences and peculiar style of thinking. Along with his odd method of thinking comes his unusual style of artistry. His lyrics are a landscape of rich metaphor plants and fabulous colorful allegorical foliage and have grown into adulthood since his last artistic release. The Dark Alleys of his mind are illuminated with the sparks of thought and dark wonderment. Follow the Luminous glow into the dim light of sleeplessness.

Bandcamp Daily  your guide to the world of Bandcamp